Roberts and Plechan - Meet the Athlete Commission nominees (3 of 4)

Here we meet Jill Roberts of Australia and Agata Plechan from Poland. 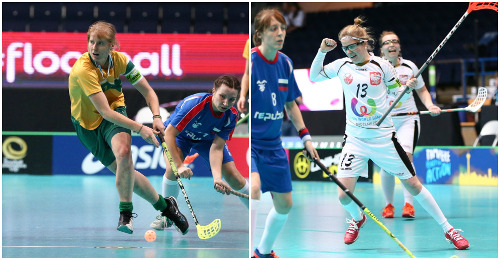 Jill has been in the Australian team since 2005 and has been the team captain for several years. A qualified Physical Education teacher, she is passionate about Floorball and has played in both Switzerland and Sweden at different times to help improve her skills and to try to take more knowledge back to Australia. Elected to the ATC in 2015, Jill wants to continue as an ATC member so that she can help steer the direction of floorball at a world, national and domestic level.

“My professional background as a teacher, coupled with my experience as a player, gives me the necessary skills to not only promote Floorball but also ensure it´s ongoing development and acknowledgement.”

Agata is an experienced ﬂoorball player & young entrepreneur. Holding a Masters Degree in Development & International Relations, she has worked in many international organisations including European Parliament and European Olympic Committees EU Ofﬁce in Brussels. Since 2007 she has lived in Denmark where she plays floorball & runs her own company in Copenhagen.

“I am sure that my experience from working in the European OC Ofﬁce, where sport is combined with all different aspects of human life, will help me to perform well as part of the Athletes´ Commission.  I care about every level of ﬂoorball development and I dream about seeing it as a part of the Olympic Games.”