The season of competition ended in France on the 23rd and 24th of May, with first and second division Play-offs in the city of Orléans, hometown of the legendary Jeanne d’Arc, an hour and a half drive south of Paris. 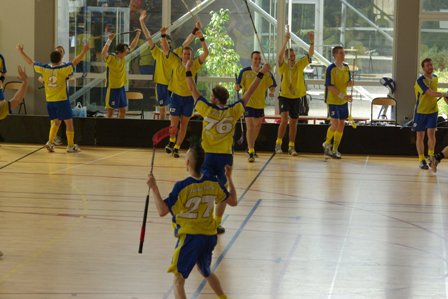 The season was the 5th in history for French floorball with a record of 15 teams involved, 5 of them fighting for the National title in 1st division, and 10 others  entering a thrilling battle in the 2nd division to grab one of the three spots to play in the elite group next year.

IFK Paris is the oldest club in France. Founded in 1989 by a Swedish citizen, it opened up to players from other countries and of course to French players at the end of the 1990’s. IFK Paris also created the French Floorball Association (AFF) together with Marseille and Nantes in August 2002.

IFK Paris took part in the first four seasons of the French league but had to leave the title to Marseille Rascasses in 2005 and 2006 and to Paris Université Club in 2007 and 2008. The yellow and blue jersey team (paying tribute to their Swedish origin) defeated the Parisian rival “PUC” 6 – 2 in Saturday’s first Semi-final while the Marseille Rascasses defeated the young but consistently improving Lyon Pirates with 5 – 2.

On Sunday afternoon, an exciting game between IFK and the Rascasses ended the season. A lot of intensity, full physical involvement by both teams although sticking to great positive competition spirit, technical skills and well executed tactical plans were the ingredients of a most enjoyable final. The first period ended  with a draw (2-2) but IFK then managed to take the lead and to pile up goals to end the game with a clear advantage of 8 – 5.

All teams from the second division were playing as well. The last 6 teams of the regular season were invited to take part in symbolical Play-offs to gain experience of regular competition conditions, which is a key to the development of clubs, as some where just created a few months ago.

On the other hand, 4 teams were involved in important games to gain access to Division 1.
Grizzlys du Hainaut (North of France) defeated Besançon Dragons in the final. Both teams are promoted while Ericsson Vikings took the third seat, leaving Orléans Gladiators, the hosts of the weekend, with the very bitter 4th place. 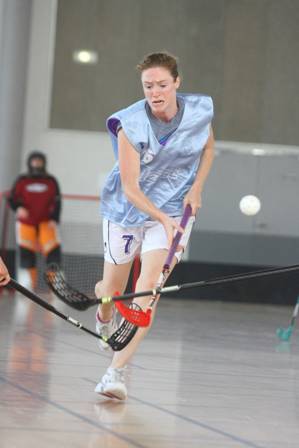 This week-end of exciting Play-off games was also the opportunity for the AFF to promote Women´s Floorball. Ladies from all the clubs gathered on Saturday night for a training session and were invited to play a 100% women friendly opening game to Sunday’s final.

The AFF is very proud of this successful initiative and hopes this is only the mere beginning of rapid expansion. Some of the female players, involved in this event, have built a women team to participate in Amsterdamned tournament in July. This will be the first appearance of a French women team, although not being an official national team, in a tournament of any kind.

All French clubs are already looking forward to the next season, hopefully with additional participants, to continue to build floorball history in France.