The Championships of Australian Pacific Confideration (APAC) in Perth, Australia, has moved into playoffs phase. In the semi finals Singapore played against Korea and Australia U19 challenged Australias Men´s team. 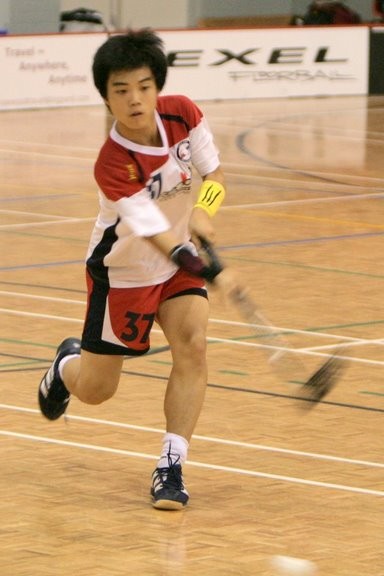 The second period was dominated by penalties for both teams and Singapore first luckily scored shorthanded and then directly after when Korea’s Jon oh Lee took a 2+2+10 for roughing and unsportsmanlike behaviour. The match was quite hard and there was a number of almost violent situations were both parties were equally involved.

The last 30 minutes of the match Korea were looking franticly for an equaliser hitting the goal posts and bar a number of times. The Singaporean goalkeeper Abdul Arshad also made a number of good saves. During this continuing pressure Singapore got a counterattack, which they where able to use and took a 4-2 lead. In the end of the match the Koreans grew more and more frustrated and the referees had a hard time keeping control of the teams. Singapore won and went to the final with 4-2.

In the second semi final which was a replay of yesterdays match the Australian Men took on the hungry Australia U19. Just like in the previous match the U19 tried to move the ball, but with a little bit too much of running and too little passing, giving possibilities for the Men to prevent any real difficult situations. The match picture therefore looked very much the same as in the previous match. The Men were able to shoot a little bit more, but quite far away and the U19 trying to close onetimers. Australia Men took the lead by a fast counterattack by David Speldewinde in the end of the first period.

The second period continued to be tight, with both teams trying hard to control the ball, in order to avoid any mistakes. The Australian U19 team must be given credit for being able to prevent the Men’s team from playing their own game, thus it made the match a bit boring for the spectators, since the number of chances were limited. The U19 captain Timothy Boteler scored a beautiful goal just from the best sector equalising the result to 1-1, which also was the result after the second period.

In the beginning of the third period the Australian Men’s team scored a second goal again chancing the match picture. Now the U19 was hunting for an equaliser, using all possible allowed and quite some disallowed methods in order to score. The Men held back focusing on defence. U19 tried the last two minutes to equalise without a goalkeeper, but the nearest chance was given to the Men, who got a penalty shot, when one of the U19 played the ball in the goalkeeper area. The U19 goalie Joshua Davey however saved the try of Australia’s Jonathan Veron. Australia Men won and went to the final against Singapore.

The third day of APAC 2008 offered three decisive matches, when the teams were trying to secure a good place in the semi-finals.

Australia U19 – Singapore 2 – 5 (0 – 1, 1 – 1, 1 – 3)
The U19 Australian team took on Singapore in the first match. They however had a really bad start when the first Singaporean shot went in. Then the importance of the match started to show, both teams played a controlled game trying to avoid mistakes and there were not too many chances created. The main difference between the two teams is that the Singaporeans were much more prepared and alert, which was clearly shown when Australia equalised the match in the second period the Singaporean scored directly in the next situation. In the start of the third period again the first shot went in giving Singapore a 3-1 lead. The Australians started to grow frustrated and therefore taking unnecessary penalties, giving Singapore the advantage and also the match.

Australia – Australia U19 8 – 1 (1 – 0, 2 – 0, 5 – 1)
There was no question about it, that this was the hegemony match of the tournament. Both teams played well, the U19 being a bit better technically, but loosing to the Men’s team in both strength and situation control. The U19 turned the play fast and moved into attack, but had a hard time getting the last pass to the own players and when they did shoot, the shots were not really dangerous. Where as the Men’s team scored a goal, practically every time as they got an open chance. After two periods the Men’s team lead with 3 -0. The third period was purely Australia’s, since they took total control of the field. The only mistake being that they forgot one U19 player free, giving them the consolation goal shorthanded with just one minute on the clock.

Korea – Malaysia 5 – 1 (0 – 1, 1 – 0, 4 – 0)
This match would determine which team would make it for the semi finals. It was quite clear that neither team wanted to fall out of the tournament. Even though there was not a large crowd watching the match both teams had their supporters cheering for them. Malaysia dominated the first period making the first goal, trying to play the ball more on the floor. Like many Asian teams, Korea ran a lot, but they had some difficulties to get the ball with them. The hard movement and fore checking of the Koreans gave them first the equaliser and then the lead in the game. Malaysia had the possibility to take the lead in the second period, when they got a penalty shot, but Abdul Ghaffur went too close to the goalkeeper and missed Malaysia’s chance. In the third period the Korean physical play gave them the advantage, tearing down the Malaysian defence slowly and scored an additional three goals, taking a 5 – 1 lead.

Tight matches during the second day in Perth

The second day of APAC 2008 offered in all four matches a good crowd. All teams improved their performance from the first day, getting more into the competition.

Australia – Singapore 2 – 4 (2 – 1, 0 – 2, 0 – 1)
In the morning match Singapore took the lead early in the first period and Australia equalized shorthanded after the Aussie goalie Jacob Stanley threw through the field to a free player. The Australian goalkeeper continued to keep his team in the match with a number of world class saves, when Singapore added pressure and started fore checking in the second period. Singapore being the more talented and skilful team took the lead, but Australia still tried to turn the game around and created a lot of chances, but failed in performing even with an empty net.

Korea – Australia U19 3 – 4 (1 – 1, 0 – 3, 2 – 0)
The U19 Australian team was full of energy after their victory against Malaysia and started hard against Korea, giving them the lead. Korea fought back and where able to equal the score in the first period. The Koreans played a very physical game, trying to put the young Aussies out of balance, which resulted in a number of penalties for Korea, used effectively by Australia taking the lead again with 4-1 in the second period. Korea increased the tempo for the third, which the Australian U19 had difficulties to follow and it also took the Koreans close, extremely close but not close enough.

Malaysia – Singapore 2 – 16 (0 – 7, 0 – 4, 2 – 5)
This match was not one of the best in the tournament, Singapore played with great self-esteem, not really giving the Malaysians a chance. The audience saw a number of great performances of the Singaporean team machine and some spectacular goals. The Malaysian team was clearly focusing already on their match tomorrow against Korea, in order to avoid finishing last in the tournament.

Korea – Australia 5 – 6 (2 – 1, 0 – 5, 3 – 0)
Korea started well again, determined to beat the Australians in the last match of the day. Everything went well up to the second period and Korea had the match leading 2 – 1. Then something happened in the second period and the Aussies took total control, scoring some fast goals, out of which one was unfortunate when the Korean goalie lost the ball for a few second in the second period giving the Australians a lead with 2 – 6. The third period offered the full house a real killer, when Korea came back and reduced to 5-6, with still 5 minutes left on the clock. However the Koreans did not come closer than the post during the last minutes.

Standings after the second day:

Check the line-ups of the teams here.

The 5th Asia-Pacific Championship (APAC) is for the first time played outside Singapore in the Luftus Sports Center in Perth, Australia, as the first international tournament organized by the Australian Floorball Federation. The tournament is played with five male teams: Australia, Korea, Malaysia, Singapore and the Australian Men’s U19 team. India, Pakistan and New Zealand had plans to attend, but for different reasons decided to stay home. Japan on the other hand informed that they will not be able to participate, since they take part in both the World University Championships in Finland and the WFC in December with nearly the same national team.

During the first day three matches were played.

Malaysia – Australia 4 – 13 (2 – 5, 2 – 2, 0 – 6)
In the first match Malaysia shook Australia, with a strong start of the match taking the lead, after a few fine combinations. When the Australians started to play a more physical floorball, they took control of the match after scoring five goals just in front of the net, where the Malaysians had left them totally open,. In the second period the Malaysian goalkeeper Illyaz bin Yushaak and Khalid bin Abdul Rahim scoring all Malaysias goals kept their team in the match. When Malaysia got tired in the third period Australia made some fast goals tying the match with 4 – 13.

Singapore – Korea 5 – 2 (2 – 1, 2 – 0, 1 – 1)
Korea dominated the first ten minutes of the match giving them a 0-1 lead, Singapore however came back equalising the match and still taking the lead in the first period. Korea played a more controlled game, but Singapore scored the goals with two counterattack goals in the second period. In the last period Korea continued to try, but without great luck, so Singapore took the victory by 5-2.

Australia U19 – Malaysia 15 – 2 (4 – 0, 2 – 0, 9 – 2)
The third match of the day had all the ingredients of a major championship match. The Malaysian team put up a good fight in beginning of the match, but after a few easy goals in the end of the first period the young Australians went their own way. The Australian team got a match penalty for a unmarked player on the match report and played shorthanded for five minutes. Malaysia was not capable of using this opportunity, since the Aussies scored two shorthand goals and the match was over. In the third period the Malaysian goalie got injured and could not continue playing, regardless that he really tried. After that a field player had gone to the goal, the Australians made an additional six goals, even though the new Malaysian goalie did his best.